When you book with an account, you will be able to track your payment status, track the confirmation and you can also rate the tour after you finished the tour.
Sign Up
15069

Why Book With Us?

Do not hesitage to give us a call. We are an expert team and we are happy to talk to you.

This is an ideal tour to Merzouga . It is a short and not long journey that will take you through the beauty of the South region where you will see Mountains, Oasis , Valleys , Gorges , Berber villages and the immense sand dunes of Erg Chebbi.

Marrakesh is possibly the most important of Morocco’s four former imperial cities (cities that were built by Moroccan Berber empires). The region has been inhabited by Berber farmers since Neolithic times, but the actual city was founded in 1062 by Abu Bakr ibn Umar, chieftain and cousin of Almoravid king Yusuf ibn Tashfin. In the 12th century, the Almoravids built many madrasas (Koranic schools) and mosques in Marrakesh that bear Andalusian influences. The red walls of the city, built by Ali ibn Yusuf in 1122–1123, and various buildings constructed in red sandstone during this period, have given the city the nickname of the “Red City” or “Ochre City”. Marrakesh grew rapidly and established itself as a cultural, religious, and trading centre for the Maghreb and sub-Saharan Africa; Jemaa el-Fnaa is the busiest square in Africa.

From Marrakech to Fes, or from Fes to Marrakech, depend on your location, can be customize!

At 8:00 a.m your private driver will be ready and waiting for you in your hotel where you will be picked up.you will start your journey southward to Boumanle Dades via Ait Ourir,Taddert and Tizi n’Tichka pass,located in the heart of the High Atlas Mountain chain.Additionally,you will visit the berber village of Ait Ben Haddou,it was established in the 11th centry,its position on the main Marrakech to the sahara route,meant it was an ideal stop off for traders taking salt across the desert and returning with goods such as gold and ivory.After lunch you will follow the route through Magouna Roses to Dades Valley.where you will end your day with dinner and other accommodations at your hotel.

Depart in the morning to Sahara Desert (Merzouga) via Tinghir,and Todra gorges ,where you will take a walk to exploring this magnificent and narrow gorges where vertiginous cliffs of pink ochre frame a crystal clear and fresh river.After lunch,you will leave to Erfoud via Tinjdad with its old underground irrigation system, and Touroug Palm Plantations reaching Erfoud town for a visit of a local fossil craft workshop. Continuing to the fascinating dunes of Erg Chebbi, also known as the Dunes of Merzouga. After a rest of 30 minutes, you ride Camels directly to the Oasis where you will enjoy the night with dinner and entertainement under the Nomad tent .

Wake up to the sunrise on the ever-changing dunes and take advantage of the slow rhythm of life in the desert. After breaskfast,you will start your trip to Fesvia Rissani and Ziz Valley enjoying its plam plantation. After lunch in Midelt,you will continue discovering the rural environs of the Middle Atlases Mountains Berbers.Covered with evergreen pines, tall cedar trees, and poplars, and laced with flowing streams.Your next stop will be in Azrou where you will have the opportunity to see the largest forest of cedar trees in the region that is inhabited by monkeys. Afterward,you will continue to fes. 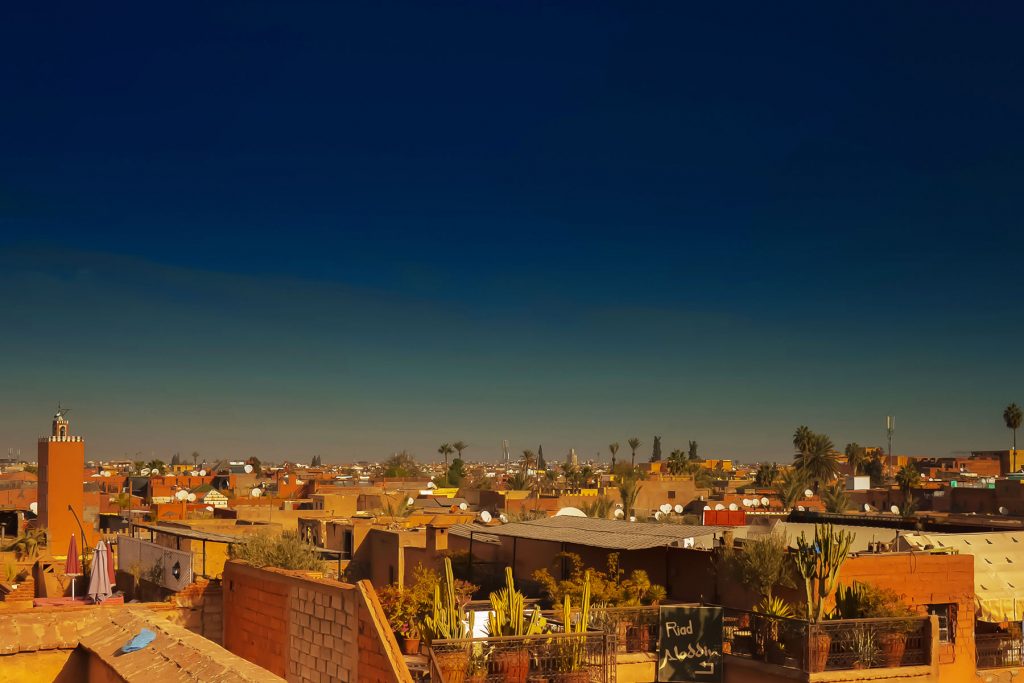